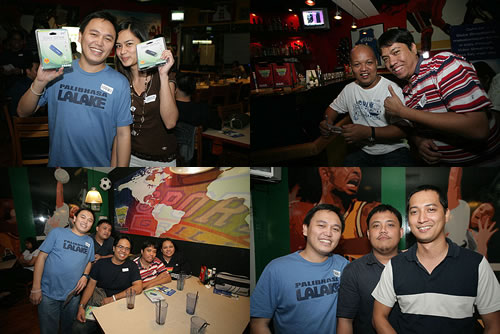 I could write a lot of things about the blogcon last Monday but I’d just be echoing what everyone has to say about it. So I’ll just mention that AJ noted that I (along with Anne) had a grand entrance for being fashionably late, though I didn’t notice. wink I was so hungry I even forgot to register!

Now to the more important parts: I won a 256MB flash drive in the raffle, and Anne too! In fact, three prizes were won by our table alone. Food was great and limitless and we bloggers had the whole NSG Greenbelt 2 all to ourselves.

I had a grand time shooting with Karl & Mimi’s Canon EOS 5D (photos above were from that camera, thanks Karl) and they’ve just posted some of the photos we took that night. It was raining with 350D bodies in almost every table the event could’ve been sponsored by Canon. Jayvee was all smiles with his rumored lady–love (chika!) and Yuga was his usual charming problogger self. Marc gave his blog SEO talk and Rico was also there though quieter than he typically is. wink Bimbo and Direk Soxy Topacio gamely set the record for being the first to order alcoholic drinks, I think. Other pisay bloggers were also there: Clair, jobarclix, Chris, and Ka Edong. Also, I finally got to meet a personal favorite pinoyblog: Eugene of vaes9.

Kudos to the Globe Innove people for picking up the tab again. The attention and recognition that you give to Filipino bloggers will surely reap its benefits in the months ahead.